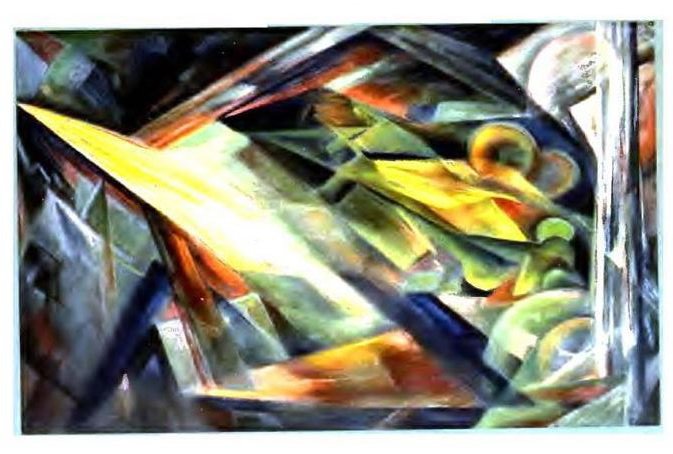 Corresponding with a friend, Van Gogh explain some of the secrets of his art and his inspiration. Expressionism still had not appeared, but the words of Van Gogh, an initiator, prefigured ever since a new attitude that had to oppose impressionism. After several pages of discussion and theory, Van Gogh was writes the following:
“Let’s leave apart the theories, I’ll better clear it up for you with an example about what I think in this regard. Just think: now I’m painting the portrait of an artist who is my friend, an artist who dreams big dreams, who works as the nightingale sings, because that is his nature. This man must be blond. All the love that I feel for him I have to paint on this canvas. First I draw as accurately as possible and this is only the beginning. Then I begin to color. I am exaggerating the blond of the hair, I take orange, chrome and lemon-yellow. Behind the head – rather a banal room wall – I paint the Infinity. Doing a simple background of the purest blue, the highest concentration possible. Through this joining of colors, the blond head on the rich blue of the fund misteriously impresses as a star in the deep Ether.“
This quote by Van Gogh is relatively simple, explaining how the preferential treatment of a part of a painting, by mixing colors very carefully chosen and overlaping in other colors chosen complementarily to the intention that he wishes to materialize on canvas, Van Gogh explains without critical or aesthetic means, the new form or the new current that was about to be born, more specifically, the relationship between the image embodied in the artist’s mind conceptual rendered in a certain color palette and overlaying it on a background that defines a notion like “infinity” in this case, leads to the creation of a subliminal feeling with highly elevated subjective nature of a character whom Van Gogh considered him particular and succeeds in his explanation to treat him in a special way, taking him in relief precisely through this color overlaping plus concept.
We arrive in this way to the theory advanced even since 1890 by Alois Riegl, who Contradicting Semper- the great architect, who fixed the evolution of artistic styles depending on the material, technical and practical purpose, was advancing a new doctrine in which the decisive elements of Semper (material, technique and scope) are becoming just a simple coefficient of friction “Reibungskoeffizient”, put in the way of the creator’s free expansion. The appearance of the styles is determined, after Riegl, by the will of art “Kunstwollen”, safe and purpose aware,which the artist, in its originality, and in full knowledge and assuming an artistic attitude and wills, gives it expression in the artistic act.
From these theories apparently started the Expressionist doctrine.
In this case, upon the example of Van Gogh, the limit between Impressionism and Expressionism is almost imperceptible, in the end it is relying only on the conscious and voluntar act of the artist, whom exacerbating the feeling or expression, leads to an eventual enrollment in one of the two currents. From this point of view, Van Gogh is paradoxical a precursor of Expressionism.
In the first case (Impressionism), the feeling gives up and, prevented to develop itself, it remains graceful; as long as (in the second case, Expressionism), enhanced by the resources of a conscious will, it covers the impression and project it in the space of other values.
The opposition impression-expression is preferred point of view of the theorists, but artists such as Van Gogh in this case, they found the expressionism among the consequences of the expressionist idea.
It is quoted here also Herwarth Walden, whose word has become the motto “art is giving, not playback” (Kunst ist Gabe, nicht Wiedergabe) (gabe = acquisition, talent).
So the Expressionism – after Alois Riegl- is representing this “gabe” native endowment, talent … it doesn’t have to make any appeal to nature, but only to their own experiences, reservoirs, criteria and chromatic interior, which in fact it is nothing else but a mood, not a playback of the material in front of him.
Fritz Burger can be also mentioned among the initiators of modern art theorists and as an initiator of modern art, with mystical valences, sometimes exhilarate revolutionary, floating a little in the air full of political doctrines, with support in the Hegelian philosophy and idealist nature subliminal ideological foundation, sometimes reaching what we encounter between the wars in compiling some ideologies resting on the Nietzsche’s superman theory, Wagner’s Valkyrie and to everything that the interwar period meant in terms of ideological-cultural conexions.
Fritz Burger was close friend with Wassily Kandinsky and Franz Marc who dies during the Battle of Verdun in 1916. This sad event made Fritz Burger to paint Es werde Licht – Let there be light! 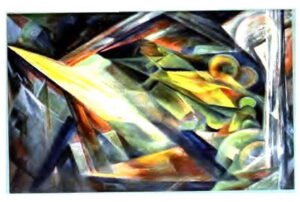 Burger’s canvas expresses very well this side of the Expressionism that demands absolute painting, a painting which through the lack of any contingency, through the direct expression of feeling, through the indifference of the material, to equal all the possibilities of music.

Let’s do not forget that the Expressionism is especially a generous and ample German movement and of course one of the most significant manifestations of the time.