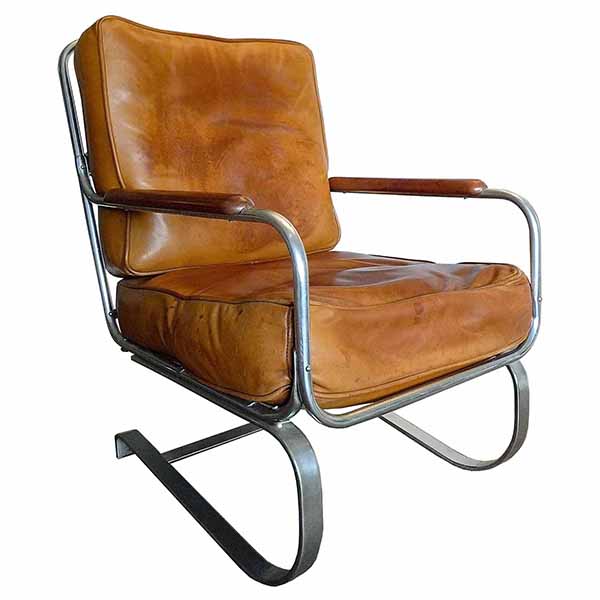 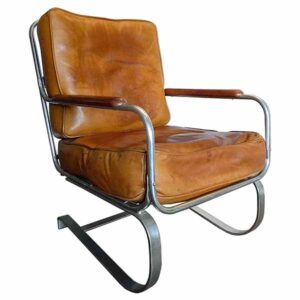 Very comfortable, it can be used like a rocking chair, this one has been reupholstered in cognac leather, pillows filled up with down –  it is an amazing chair, a true icon of the American Art Deco.


Born Karl Emanuel Martin Weber in Berlin, Germany, Weber initially trained under the royal cabinet maker Eduard Schultz in Potsdam, before enrolling at the Kunstgewerbeschule (School of Decorative Arts) in Berlin in 1908 where he studied under Bruno Paul. Graduating in 1912, Weber went on to work in Paul’s office, having previously assisted his tutor in the design of the German pavilion at the 1910 ‘Exposition Universalle’ in Brussels.

It was the design of a second pavilion that proved to be the turning point in Weber’s career. Paul sent his assistant to San Francisco, California to supervise work on the German pavilion being built for the Panama-Pacific International Exposition of 1915. However, Weber was soon overtaken by other international events. The onset of World War I prevented him from returning home despite the construction of the pavilion being suspended, leaving him stranded in California. (Wikipedia)

Later, in 1924 he becomes US citizen and he changes his name by adopting the less Germanic name “KEM”, formed from combining his three initials.

He works for Barker Bros. Store in LA „Modes and Manners” who’s designer and concept author he was, considered to be among the early leaders in the development of the modernistic furniture movement.

Over the course of the next decade, Weber would work ceaselessly to promote modernism on the West Coast. His remarkable furniture would play a central role in popularizing the new movement and broadly influence California – and all of American – design of the era.

Weber was especially eager to explore the possibilities of new materials and production methods, from tubular metal to the new man-made materials then beginning to appear in the marketplace.

For some time he had wanted to try out the idea of a chair that could be sold disassembled and readily put together by the consumer. For months in the mid-1930s, he labored on a design that could fit into a box small enough to carry home from the store. The result was his Airline Chair, which remains one of his best-known designs. 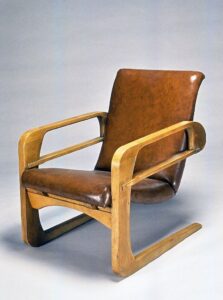 Weber had more success with the tubular steel chairs he designed for the Lloyd Manufacturing Company in Menominee, Michigan. Most of Weber’s chairs and other pieces for Lloyd were priced in the $20 to $140 range, making them accessible to the broad middle-class market. But he also continued to produce custom designs for well-to-do clients.

The outbreak of World War II curtailed Weber’s design work. He tried to interest the government in a panelized construction system he had invented for defense-related housing projects, but could not secure a contract. After the war he moved back to Santa Barbara and worked mostly as an architect, building a handful of houses there and in nearby Montecito. By the late 1950s, his health began to fail and he died in 1963. (CHRISTOPHER LONG, associate professor for architectural history and theory in the School of Architecture, University of Texas at Austin, is working on a biography of Kem Weber.)