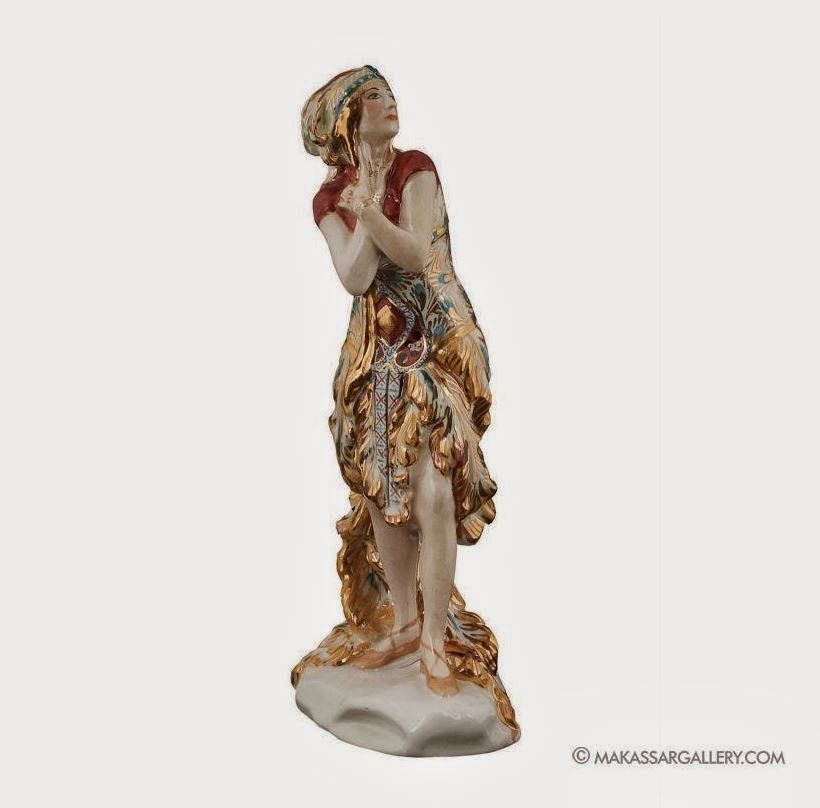 The Lomonosov Porcelain Factory, also known as Imperial Porcelain Factory pf St. Petersburg, was founded in 1744, on request of Empress Elizabeth, dauther of Peter the Great of Russia.
more details about its history click here:
http://en.wikipedia.org/wiki/Imperial_Porcelain_Factory

After it has been nationalized in 1918, the factory edited figures of propagandists subjects. At that time, USSR was investing huge money to develop the art field: literature, theater, painting, ballet.
In the same time the Ballets Russes under the direct lead of Seghei Diaghilev, was in its triumph period.
The same importance was accorded to all the components of those dance masterpieces: music, choreography, sets, costumes, performance.
Fokine’s choreography and the costumes of Leon Bakst impressed at the highest level the Parisian audiences – instead of pastel tones, they got flamboyant colors and exotic magic.
The matter in fact, the Ballets Russes would not have dominated memories withou the costumes and scenery by Leon Bakst, Alexandre Benois and Nicolas Roerich. Leon Bakst created the sets and the wardrobe for Scheherezade and for the Firebird. The title role was danced by the famous ballerina Tamara Karshavina and the ballet was of a great success as well for her and Leon Bakst. 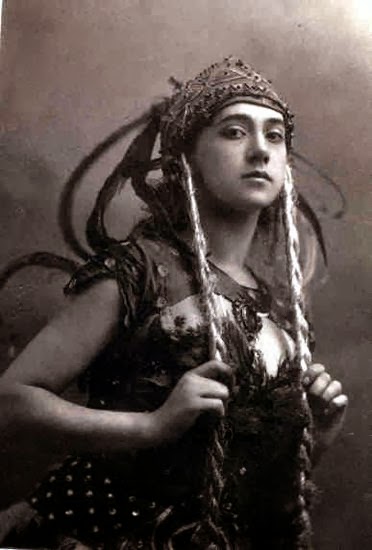 This magnificent costume also inpired the painter Jacques-Emile Blanche in his portrait hanged in the Museum-Library of the Opera Paris.
Tamara Karsavina dancing in L’Oiseau de Feu ballet by Igor Stravinsky 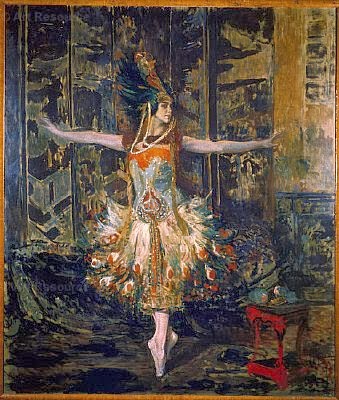 Echo Russian seasons “in the Hermitage

ARTinvestment.RU – 17.01.2010,06:57
in the State Hermitage Museum in the traditional cycle of “the Christmas Gift” an exhibition “Echo of Russian Seasons”, dedicated to 100 anniversary of “Russian Seasons” Sergei Pavlovich Diaghilev (1872 – 1929) in Paris. The exhibition includes more than one hundred works, including sculptures and table arrangement, vases and ceramics, cups and dishes, tubes and bottles of spirits.
After the great success of the exhibition of Russian artists, which took place in 1906 in the Paris Salon d’Automne, SP Diaghilev, under the patronage of the Imperial Court of Russia and influential people in secular circles in France, began to organize Russian Seasons – is the name received the annual tours of Russian artists in Paris. In 1907, as part of seasonal passed Russian historical concerts featuring Rimsky-Korsakov, Rachmaninov, Glazunov. Then in 1908, took opera season, during which the French captured the speech FI Chaliapin in “Boris Godunov”. In 1910, the repertoire includes ballets, among them a resounding success enjoyed “Scheherazade” and “The Firebird».
Russian seasons in Paris and won over twenty years held him close account annually presented to the audience the results of artistic search and new experimental forms, the surprising variety of topics. At performances Seasons born glory LS Bakst , NKRoerich , A. H . Benoit , Stravinsky, Prokofiev, Mikhail Fokine, Nijinsky, VF, TP Karsavina.
Seasons Diaghilev, especially the first, played a significant role in the popularization of Russian culture in Europe and contributed to fashion at all Russian.
Russian seasons have not been displayed in Russia, but their echoes they heard and reflected in the works of Russian artists, in particular on porcelain.
The exhibition will show how images of Russian seasons and theatrical atmosphere that prevailed in St. Petersburg early XX century, embodied in the products of the Imperial Porcelain Factory, which influenced the development of art porcelain members of the artistic association “World of Art».
Content porcelain sculpture Konstantin Somov , created at the Imperial Porcelain Factory as models to copy participated in the Paris Exposition of 1906. By order of the plant in 1913 SN Sudbinin performed the portrait sculpture TP Karsavina and A. Pavlov.
ballet “Firebird” has inspired many artists, as evidenced by the sculpture by model DI Ivanov “Ballerina T. Karsavina in the role of the Firebird ballet” L’Oiseau de Feu “(1920),” dancer Mikhail Fokine in the role of Ivan Tsarevich in the ballet “Firebird” (1951) and EE Eropkin “The Firebird” (1988); cup and saucer ( form – MA Sorokina, painting – VG Bogdanov, 2008) and stratum NL Petrova, “Ball Firebird” (2008).
Harlequin, Columbine and Pierrot – traditional characters of Italian comedy of masks, which became the beginning of XX century favorite characters, literary, artistic, musical works, and they often met in art porcelain. At the exhibition you can see the tracks “Columbine” and “Harlequin” (both – 1922) SV Chekhonin differing subtlety elaboration of images; dish “Pierrot and Harlequin (Harlequinade”), performed on the design of VM Masyagina (1922); sculpture “Columbine” (1923) for model A. Glebov-Sudeikina.
For explanation of literary works created service “Ruslan and Lyudmila” (form, drawings SV Chekhonin, 1926), a dish Grad Kitezh “(painting ZV Kobyletska, 1921), inspired by creativity Ivan Bilibin , painted cup and saucer from the service “Humpbacked Horse” (1919) and bowl with a lid “Sadko” (1922), as well as the sculpture “Snow Maiden” (1922), “Lel” and “Kupava” (both 1948), performed on models and painted AV Schekatihinoy-Pototskaya .
theater devoted to the topic of a series of” Clothes Scene “(painting SK Rusakov, 2009), including plates” Curtain “,” Padugi “,” backstage “and” Harlequin ».
The exhibition graphic works: sketches of vases, table songs, paintings sculptures, plates, crockery, etc.
The exhibition illustrated scholarly catalog (St. Petersburg, Publishing House, 2009), which precedes the opening chapter of Anna Ivanova, head of the Division “Museum of the Imperial Porcelain Factory,” the State Hermitage Museum.
exhibition “Echo of Russian seasons” of the cycle “the Christmas Gift” in the Hermitage will be open until March 28, 2010.
Source: hermitagemuseum.org
RETURN TO HOME PAGE